Both are a way of deploying multiple services that are isolated from each other on a single platform. VMs, in general, is software that runs on top of hardware/physical system. It is a virtual server that acts as a hardware server. In the traditional virtual machine, there is guest OS, dependencies/libraries, and its applications. While in the container, you do not need to virtualize the whole computer system, simply virtualize the OS, so that it only has applications and dependencies. In a container, multiple systems run, isolated from each other on a single server. As compared to VMs, containers are light in weight as in that, there is no guest OS and they have an entire set to run the OS.

In Virtualization, there is a hypervisor between the VMs and the infrastructure. It creates and runs the VMs although, all VMs have a separate OS that runs on the same server. The size of VM is much larger than the container, as we know that each VM has its own guest OS hence, the overhead to manage and store these OS are added. While in containerization, there is a basic OS, which gives basic services to all containerized applications. In Containerization, you have isolation among the containers.  The container needs a few seconds to start while the VM takes minutes. In containerization, you have portability as in that you do not need guest OS per container. 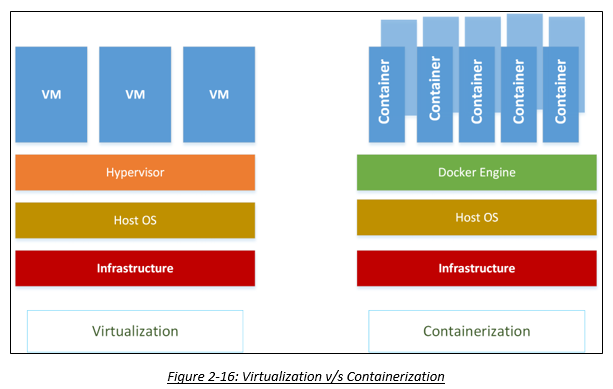 Protection from System Failures Technology is always at the risk of crashing down at the wrong time. Businesses can tolerate a few glitches, but if your developer is working on an important application that needs to be finished immediately, the last thing you could wish for is a system crash.

To counter this risk, virtualization lets you open the same work on another device. Store all your backup data through virtualization on cloud services or virtual networks and get easy access to it from any device. Apart from that, there are usually two servers working side-by-side keeping all your data accessible. If one faces any problem, the other is always available to avoid any interruption.

Hassle-free Transfer of Data You can easily transfer data from a physical storage to a virtual server, and vice versa. Administrators don’t have to waste time digging out hard drives to find data. With a dedicated server and storage, it’s quite easy to locate the required files and transfer them within no time.

You’ll realize virtualizations actual worth when you’ll have to transfer data over a long-distance. You also have the choice of getting a virtual disk space. If you don’t need much space, you can opt for a thin-provisioned virtual disk.

Firewall and Security is a major aspect IT professionals have to focus on. However, with virtual firewalls, access to your data is restricted at much lower costs as compared to traditional methods. Through virtualization, you get protected by a virtual switch that protects all your data and applications from harmful malware, viruses, and other cyber threats.

You are allotted the firewall feature for network virtualization to create segments within the system. Server virtualization storage on cloud services will save you from the risks of having your data get lost or corrupted. Cloud services are also encrypted with high-end protocols that protect your data from other various threats.

So it’s a good idea to virtualize all your storage and then create a backup on a server that you can store on cloud services. However, in order to ensure that you do this correctly, it’s preferable to first go through a cloud computing online course, to avoid making any errors.

Smoother IT Operations Virtual networks help IT professionals become efficient and agile at work. These networks are easy to operate and process faster, reducing the effort and time required to work on them. Before virtual networks were introduced in the digital world, it would take days and weeks for technical workers to maintain and install devices and software on physical servers.

Apart from the operations, visualization has also benefited IT support teams in solving technical problems in physical systems. As all the data is available on a virtual server, technicians don’t have to waste time recovering it from crashed or corrupted devices. Learn all the skills behind virtualization with cloud training online, and become a successful technician.

Cost-Effective Strategy Virtualization is a great way to reduce operational costs. With all the data stored on virtual servers or clouds, there’s hardly a need for physical systems or hardware, thus allowing businesses to witness a vast reduction in wastage, electricity bills, and maintenance costs. 70% of senior executives have supported virtualization by calling it efficient and cost saving.

Virtualization also helps companies save a significant amount of space which can be utilized to increase operations of a profitable department. This cost-effective strategy is both a profitability and productivity booster!

The above mentioned benefits are perfect to convince any IT expert to stop using traditional methods and switch to virtualization. With top-notch security protocols, reduction in costs and better operations you can boost your performance and help grab the next flight towards a prosperous future. The best way to do that and excel in operating virtual servers is to obtain a recognized cloud certification.